Click on this link for all the posts on water systems  >

Our main sources of water are rainwater and a stream that runs through the quinta year round. Even though we have year-round water (in all but 2012 so far), we plan to engineer the landscape for maximum water retention. Mountains soils are thin and the soil everywhere on the quinta lacks humus. Its capacity to retain water through the dry summers is limited primarily by those two factors. This not only impacts on our irrigation needs but increases wildfire hazard. Slowing the passage of water through the landscape is as essential to restoring life and health to the soil as adding humus.

In Portugal, since around 1980 (ie. following the massive expansion in eucalyptus planting) the autumn rains started to fall off, reducing in quantity, starting later, or failing altogether. The bulk of the rains started shifting to the spring where the severity of rain events also increased, meaning that the bulk of the rain runs straight off the land. Aquifers are not being replenished. Trees like the native oaks and chestnuts are going into summer less than fully hydrated and consequently getting more and more stressed. This trend is becoming more marked with every passing year.

This isn’t down to some nebulous global “climate change” that’s just so big we all throw our hands up, roll over and do nothing about it. It’s a local problem. And it’s only a multiplicity of similar local problems which have made it global. Humanity has messed too much with local hydrological cycles – the ‘small water cycles’ – until we’ve broken the feedback loops. The result is that too much water accumulates in the atmosphere and oceans and has no easy mechanism for returning to the land. When it does so, it does so with increasing drama and destruction.

This has been the elephant in the room for a while now. Everyone has been obsessing about carbon emissions, but water vapour is a far more powerful greenhouse gas and accounts for some 95% of the changes we’ve seen.

My thinking on the subject of water has been enormously influenced by the work of Viktor Schauberger. I was excited by it because of the emphasis he places on the vortex as the primary energetic form pattern in nature, something which I’d discovered through my own explorations, and because many of his insights came through a conscious engagement with natural energies, again echoing my own process. The Water Wizard is a good summary of his work.

“From water everything originates. Therefore, water is the universal natural resource of every culture or the foundation of every physical or mental development. The unveiling of the secret of water will put an end to all manner of speculation or calculation and their excesses, to which belong war, hatred, envy, intolerance and discord of every kind. The thorough investigation of water therefore truly signifies the end of all monopolies, the end of all domination and the beginning of a socialism arising from the development of individualism in its most perfect form. If we succeed in unveiling the secret of water, in understanding how water can emerge, then it will become possible to produce all qualities of water at any location, and then one will be able to make vast areas of desert fertile; then the sale value of food and also that of machine power will fall so low that it will no longer be worthwhile to speculate with it.”
Viktor Schauberger, from Das Wesen des Wasser (The Being of Water), 1934

From the introduction to the book:

"Viktor Schauberger (30 June 1885 – 25 September 1958) was born in Austria of a long line of foresters stretching back some four hundred years. He developed a gift for accurate and intuitive observation so great that he was able to perceive the natural energies and other phenomena occurring in Nature, which are still unrecognised by orthodox science. Refusing to attend University at the age of 18, to the fury of his father, Viktor Schauberger left home and spent a long period alone in the high, remote forest, contemplating, pondering and observing any subtle energetic processes taking place in Nature’s laboratory, where they were still undisturbed by human hand. During this period he developed very profound and radical theories, later to be confirmed practically, concerning water, the energies inherent in it and its desired natural form of motion. These eventually earned him the name of ‘The Water Wizard’."

Schauberger’s insights about water are profound and far reaching. He observed that when water is exposed to light and warmed by the sun, it loses its vitality and becomes sluggish. Exposed for long enough, it dies. He meant this quite literally – in his view water is a living thing, the lifeblood of the planet, rather than just a simple inorganic compound of hydrogen and oxygen.

It’s at its most vigorous and vital when it’s close to its maximum density, ie. at 4°C, and in darkness. It needs freedom to move, to flow, to meander, to be in the way that it is, not forced into straight lines or rectilinear containment. Straight lines and angles prevent the formation of the natural vortices and circulation patterns that are essential to maintaining water in its optimum state of health. Consequently it stagnates, and like anything else that’s sick and dying, decomposes and becomes a breeding ground for bacteria, moulds and algae, requiring filtration and chemical treatment to make it ‘drinkable’ again.

He also observed that the multi-layered vegetation of a natural forest creates water, an abundance of it, something which has been demonstrated through the restoration of degraded drylands to tropical rainforest from Brazil to Borneo.

Here’s a video documentary (somewhat stilted but still good) about Schauberger’s work (42 minutes). An accessible account of his work is also available in the book Living Energies.

I’ve also been inspired by the work of another Austrian, Sepp Holzer. His work has informed what’s being done at Tamera, an eco-village in the Alentejo. This is a landscape already regenerating from a comprehensive focus on water retention. More information on the perspective on water at Tamera here.

A water strategy for the quinta

When we first took on the quinta, the barroco and black plastic drip irrigation system for the vineyard and fruit terraces were overgrown and blocked, and the collecting ponds and terrace levadas (irrigation channels) were also clogged with silt and vegetation, with the stream largely finding its own way through.

For domestic use, we started by fetching water from the waterfall outside the yurt in buckets. We then progressed to piping it directly from the stream, but the dry summer of 2012 when the stream ran dry for the first time brought the focus onto water storage.

To service the buildings as well as the land, we needed contained water storage as well as natural storage. Taking on Schauberger’s insights that water remains healthiest when stored in egg-shaped containers, we built cylindrical water tanks shaped at their base to form a curve. It’s about the closest I could get to egg-shaped whilst working with affordable materials and construction methods. Schauberger would no doubt wince at the use of concrete, and even more at MDPE pipework, but budgets are budgets. 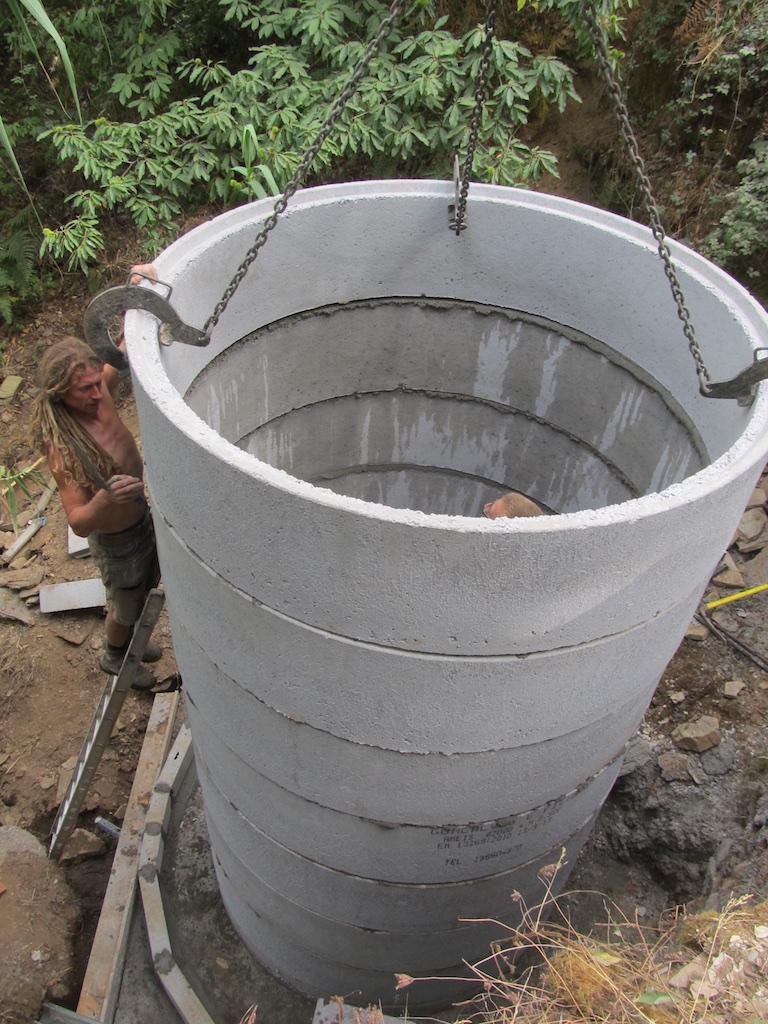 In early 2014, we completed the installation of 2 large storage tanks filled from the stream and a rainwater collection system for the smaller of the two buildings. The main tank of 12,000 litres gravity feeds the entire system, including a secondary tank of 6,000 litres which supplies the eastern end of the quinta where the wee house, the caravans, and the main vegetable growing areas are.

We also installed stand-pipes everywhere on the quinta such that nowhere is much more than 25m from a water supply. 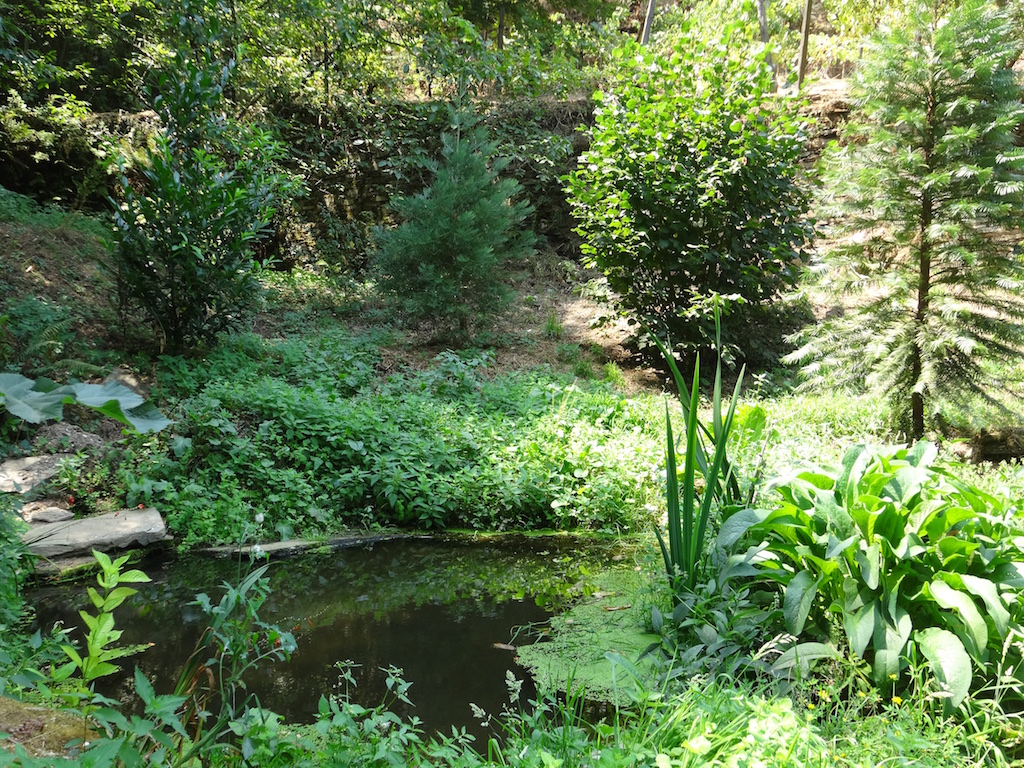 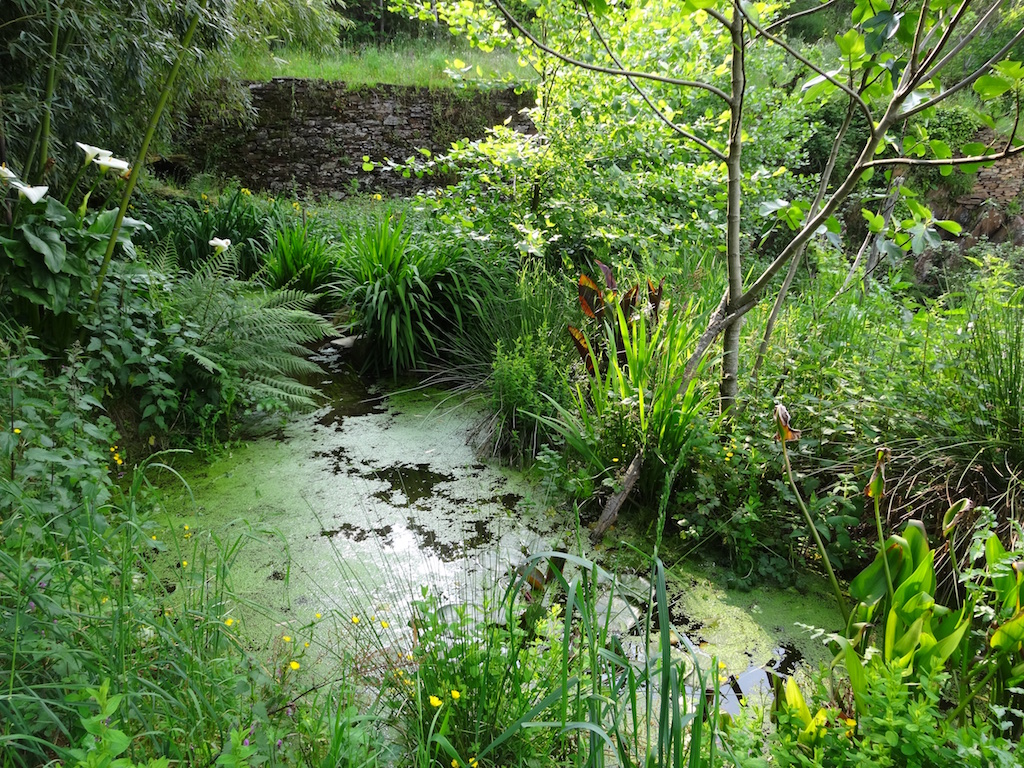 In addition to piped water, we created a system of 4 unlined ponds on the wider terraces in the stream valley to slow and infiltrate water. These are in addition to the collecting tanks at the back of the terraces which were constructed as part of the original irrigation system.

The top and bottom terraces each have two stepped ponds – the gradients involved and the underground channels carrying water between terraces made it impossible to construct a single large pond.

The bottom terrace ponds feed a collecting pool or poço for the neighbouring quinta which is constructed out of stonework beneath the terrace.

The apple orchard fed by the bottom terrace swales in 2017. This was bare, dry, infertile ground when we took on the quinta

On the bottom terrace, we dug a network of pond-fed swales, meaning this part of the quinta requires little to no irrigation. Swales were also dug along the north-facing terraces to capture rainwater runoff and have made an enormous difference to the fruit trees planted there.

The swales are designed, much like the original levadas, to take water from the stream valley to the ridges, hydrating the land along the way. 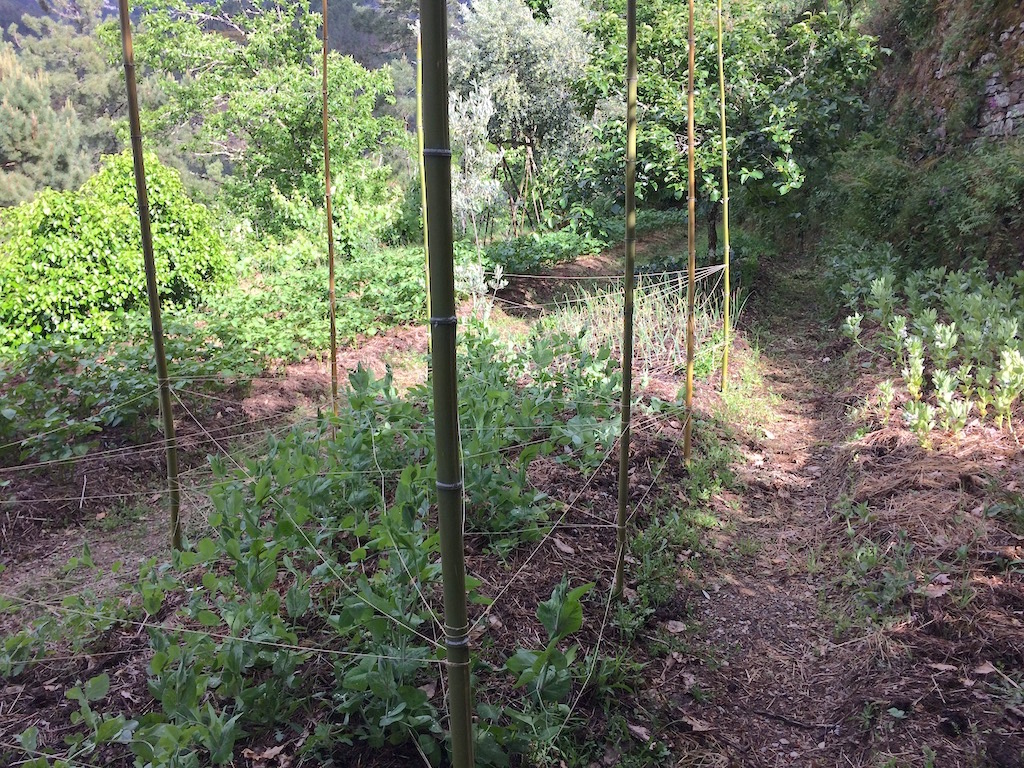 Swale pathways in the vegetable gardens

Main swales along the narrower terraces double as pathways, filled with large wood chips. These act as both organic sponge, holding water, and keep the swales themselves from being damaged, also protecting them from soil compaction through their use as pathways.

Swales are also used in the main vegetable growing terraces as pathways between beds.

I had, somewhat stupidly in retrospect, decided to use minimal irrigation through the very dry summer of 2017 just to see how much resilience I’d managed to build into the soils of the quinta. It was coping very well, but had it been better hydrated, it’s very likely the damage would have been less. Especially to the fruit trees.

Organic material is rapidly consumed by fire, so we lost a lot of the mulch in the growing areas as well as some of the wood chips in the main swale pathways. The mulch store and compost heaps burned. 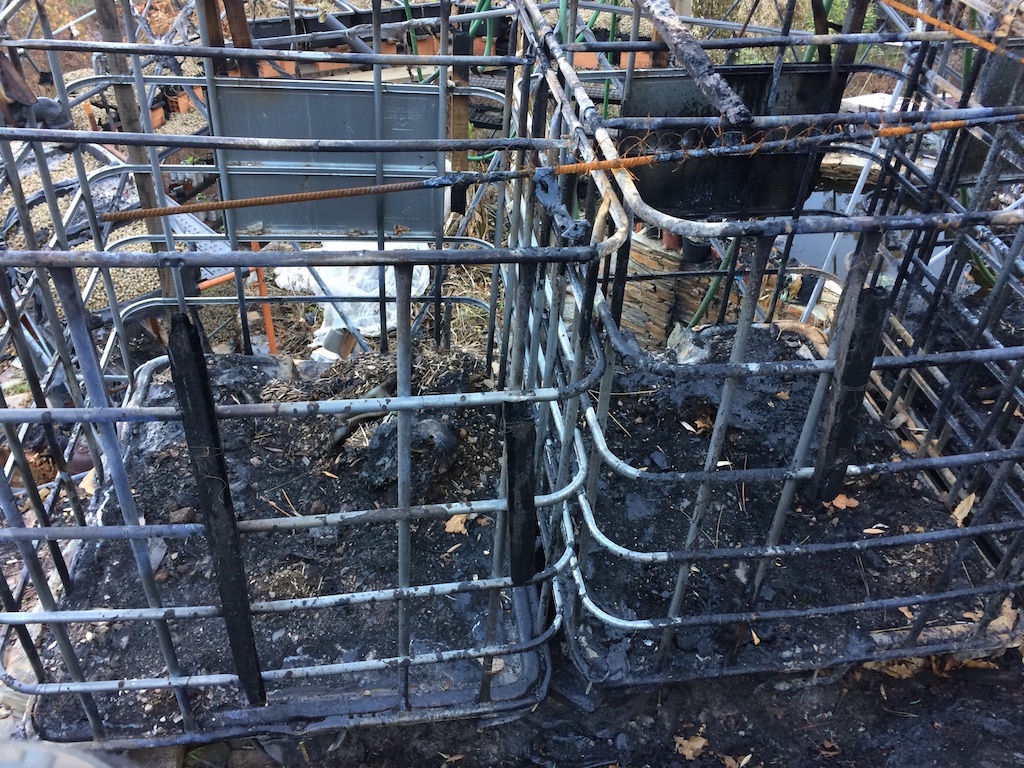 Burned out IBC tanks above the geodome greenhouse

IBC tanks and MDPE pipe burn very readily. The water supply pipe all over the quinta burned wherever it wasn’t buried. We have had to replace many sections of pipe and most of the stand pipes. We lost ten 1,000-litre IBC tanks to the fire. 4,000 litres of that certainly moderated the effects of the fire in the geodome greenhouse, but they are not a very satisfactory way to store water unless they can be encased in something like cob.

The sprinkler system installed on the yurt was certainly what saved it from being burned, so sprinkler systems for all buildings would be an asset. But for any effective sprinkler system it’s necessary to make sure the supply pipes don’t burn out. For the future, I’m working on some ideas for encasing the pipes in cob (which is very resistant to fire, but not rain).

It’s also the case that 18,000 litres doesn’t go very far in a fire, so for the future an increase in storage capacity would also be a good thing.