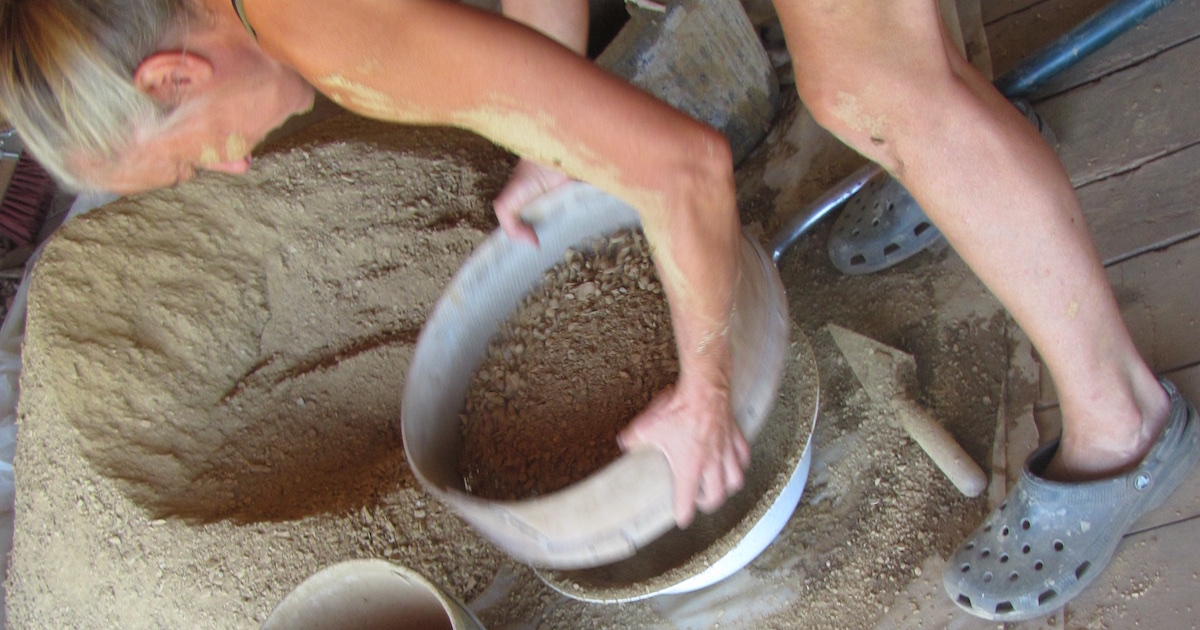 We have no particular objection to sharing the building with the local wildlife, but aren’t so keen on the winter winds and losing all our heat.

With the roof now planked and the wall heads being built up and capped ready for laying the insulation, we’re starting work on pointing the stonework in the interior of the building. It’s a messy job, so one preferably done before we get around to replacing the floors.

It’s been our aim to source our building materials as locally as we can, to use as many natural materials as practicable, and to avoid, where possible, the use of materials (like concrete) that don’t allow the building to breathe. Since local clay-rich subsoil was the original material used as mortar and pointing in schist buildings, we’re using it to renovate this one.

As luck would have it, while skidding about in vehicles during the winter rains, we discovered that we don’t even have to leave the quinta to find our clay. The cut off the track where we park the van is a source of clay-rich subsoil. Not only that, but what’s there needs dug out and cleared anyway so we can park vehicles at slightly less crazy angles. Two jobs completed in the one. Digging out the parking area

Yesterday I cleared away topsoil and vegetation, started digging down into the piles of broken schist and subsoil that have slipped down the face of the cut, and used a course riddle to remove larger stones. It’s been dry and hot now for around a couple of months, so it wasn’t hard to do. 4 barrow-loads were tractored around to the building, and heaped up ready for a finer riddle and mixing today.

Initially, we’re using the mix as is without the addition of sand as the clay proportion felt about right. A test ball left in the sun to dry formed a solid hard set without any cracks and took a fair hit to disintegrate. We’ll see how much shrinkage we get with the first application and adjust accordingly. Be sure to have fun … … while getting to work The clay subsoil is a delight to work with, especially compared to cement. It’s non-toxic, you can happily use your bare hands, any mess can be gathered up and reused, dirt and all, again and again (the set is mechanical, not chemical), and to top it all you can enjoy a mud-pack cleanse and exfoliation while you’re at it. Health spas eat your hearts out!

The saga of the communal building